*What is a Parti Poodle?* 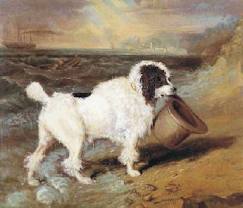 The Poodle Club of America (PCA) defines a Parti-colored Poodle as follows:

Parti-colored: At least fifty percent white, with spots or patches of any other acceptable solid color. The head can be of a solid color but white muzzle, blaze, or white muzzle/blaze combinations (preferably symmetrical) are equally acceptable. Full or partial saddles are acceptable, as long as they do not exceed the color proportion, but are not preferred. Ticking in the white of the coat is acceptable but not preferred.

Phantom: Solid base color with sharply defined markings of a second color appearing above each eye, on the sides of the muzzle, on the throat and fore chest, or in a chin and fore chest bowtie pattern as well as on all four legs and feet, and below the tail. A phantom without clearly defined face markings or one that presents with its whole face colored in the second color is acceptable, as long as it maintains all the other specified body markings. Any combination of acceptable colors is allowed.

Abstract: Less than fifty percent white, with the remaining percent any other acceptable solid color.

Sable: A coat represented by black-tipped hairs on a background of any solid color, with no particular pattern/location designated for such hairs.

Multi-patterned: A dog that clearly exhibits more than one of the acceptable color patterns, such as; a Parti with full or incomplete phantom markings (facial markings with or without presentation of the diamond under the tail), or a Phantom with additional abstract markings, etc

The breed probably dates back to the late Roman period but certainly the variety we know as the Standard Poodle was well established across the whole of Europe by the 16th Century. The Miniature and Toy varieties developed in the next two hundred years or so. The Poodle is the world?s oldest water retriever, circus performer, and truffle hunter. The ubiquitous Poodle is such a versatile dog, he can be all things to all people.

That of a very active, gay, intelligent, smart and elegant-looking dog, squarely built, well proportioned carrying himself proudly. Properly clipped in the traditional fashion and carefully groomed, the Poodle has about him an air of distinction and dignity peculiar to himself.

The Poodle is known for his intelligence, his lively, mischievous sense of humour, and his willingness to please. The Poodle is a people-oriented breed that refuses to be ignored.

Within the size limitations there is no preferred size.

The Standard Poodle is over 38.1cm (15ins.) at the highest point at the shoulder. Any poodle 38.1cm or less in height shall be excused from competition as a Standard Poodle. If excused at three shows for this reason, the dog then has the same status as a disqualified dog.

Skull should be slightly full and moderately peaked with a slight but definite stop. Cheekbones and muscles flat. Length from occiput to stop about the same as the length of muzzle. Viewed from the side, the plane of the top of the skull should extend parallel to the plane of the top of the muzzle. Muzzle long straight and fine, but strong, without lippiness. Moderate chiseling under the eyes. The chin definite enough to preclude snipiness. Teeth (42) white and strong. Tight scissors or level bite. Nose sharp with well-defined nostrils. Eyes oval shaped, very dark, tight eyelids; happy, alert and full of fire and intelligence. Ears hanging close to the head set at or slightly below eye level. The ear leather is long, wide and thickly feathered.

Well proportioned, arched, strong and long enough permitting the head to be carried high with dignity. Skin snug at the throat.

Forelegs straight, parallel when viewed from the front. When viewed from the side, the whole forelimb assembly should be placed well back on the body with a perpendicular line falling through the rear point of the scapula, the elbow at the deepest point of the brisket, and the back of the pastern. The angle of the scapula from the vertical should approach 45 degrees and the angle between the scapula and humerus should approximate 90 degrees. The pasterns are strong.

Strong and smoothly muscled. The shoulder blade (scapula) is well laid back and is about the same length as the forearm (humerus).

The chest deep, oval and moderately wide with a prominent breast bone. The ribs well sprung. To ensure the desirable squarely built appearance, the length of the body measured from the breastbone (prosternum) to the pinbone (ischiatic tuberosity) approximates the height from the highest point at the shoulders to the ground. However, the leg length is 55% of the height of the dog. The back short and strong and very slightly hollowed immediately behind the withers. The loin short, broad and muscular. Bone in proportion to the size of the dog.

Straight and parallel when viewed from the rear. When viewed from the side, muscular with width in the region of the stifles, which are well bent. Pelvis (set at 30 degrees from the horizontal) and femur are about equal in length; hock to heel short and perpendicular to the ground. When standing, the rear toes are only slightly behind the point of the rump. Pinbone protruding behind and below the set on of tail to give a well-defined buttock. The angulation of the hindquarters balances that of the forequarters.

Rather small and oval in shape. Toes well arched and close with webbing. Pads thick and firm. Nails short but not excessively short. The front feet may turn out slightly and the rear feet should turn neither in nor out. Dewclaws may be removed.

Set on high, carried up, and may be docked. The tail set is distinctly ahead of the pinbone. Never curled nor carried over the back.

A straight, smooth, forward trot, light and effortless, verging on the single track, showing balanced reach and drive; pasterns, hocks and feet showing a light springing action. Head and tail carried high. It is imperative that all three varieties be moved in the ring fully and decidedly to show correct gait.